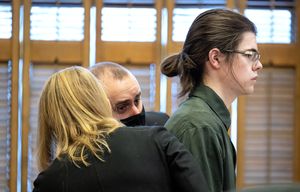 <p><p>Caleb Sharpe, accused of killing one classmate and injuring others during a shooting at Freeman High School in 2017, has pleaded guilty to premeditated murder and attempted murder, among other charges, ahead of his trial date later this month. </p></p><p><p>Sharpe, 20, appeared Thursday morning in a courtroom packed with family members and law enforcement, with more people attending via Zoom. Ami Strahan, whose son, Sam, was killed in the shooting, sat in the front row. </p></p><p><p>There was an audible sigh of relief in the courtroom as Sharpe said “guilty” to the first charge. The onlookers, including Strahan, remained stoic during the proceedings, although some could be seen wiping away tears. </p></p><p><p>Sharpe pleaded guilty to premeditated murder, three counts of premeditated attempted murder and one count of second-degree assault with a deadly weapon.</p></p><p><p>He faced multiple counts, including murder and assault, stemming from the <a href=”https://www.spokesman.com/stories/2017/sep/14/rockford-nightmare-freeman-high-school-shooting-le/#/0″ target=”_blank”>Sept. 13, 2017, shooting</a> that killed 15-year-old Sam Strahan and injured three others. As part of the plea agreement, Spokane County Prosecutor Larry Haskell amended the charges against Sharpe, dropping dozens of second-degree assault charges and leaving one assault charge to represent the more than 45 students who were put at risk during the shooting.</p></p><p><p>The names of the victims were not forgotten in the proceedings, as Spokane County Superior Judge Michael Price took the time to read their initials before Sharpe entered his plea.</p></p><p><p>Family of victims and the victims themselves were consulted before the plea agreement was reached, Haskell said in court. Haskell declined to comment to The Spokesman-Review after the hearing, as did Sharpe’s defense attorneys.</p></p><p><p>Price had rebuffed Sharpe’s defense team from offering a diminished capacity or insanity defense, leaving Sharpe’s public defenders only general denial to present at trial. Price also ruled that Sharpe would be tried as an adult, despite being 15 when he went to school armed with an AR-15 semi-automatic rifle and a .32-caliber handgun.</p></p><p><p>After reading all of the filings in the case and speaking with Sharpe numerous times, Price said he was confident Sharpe understood his rights and made the plea freely. </p></p><p><p>Since his arrest, Sharpe has remained in custody, first at the county’s juvenile jail. He was transferred to the Spokane County Jail a couple months before turning 18.</p></p><p><p>His trial was scheduled to begin Jan. 18 and was expected to last up to six weeks, according to the court schedule. </p></p><p><p>Freeman High School officials said in an emailed statement they were grateful for the community support they have received during a “difficult four years.”</p></p><p><p>“We are relieved this case has been settled. This has been a very difficult four years to endure for our Freeman community, especially for the families of the victims,” the statement reads. “The plea agreement closes this chapter of the tragedy and avoids having to experience the trauma all over again. We are so proud of our students, staff, and parents who have been resilient and resolute in moving forward on our road of recovery. We want to thank all those who have stood by Freeman and offered their love and support. Your kindness will never be forgotten. We are Freeman Strong.”</p></p><p><p> Strahan, along with the victims and their families who were in court Thursday, declined to speak with media. They will be allowed to make victim impact statements in court at Sharpe’s sentencing.</p></p><p><p>Sharpe faces a maximum sentence of life in prison. There was no agreed sentencing recommendation from prosecutors; instead, Sharpe’s defense team is expected to argue for mitigating circumstances, like age, mental or emotional disturbance, or lack of prior criminal history. </p></p><p><p>If the judge found those circumstances mitigated the severity or culpability of the crime, then he could give Sharpe a lower sentence.</p></p><p><p>Sentencing will be scheduled for the end of the month. </p></p>