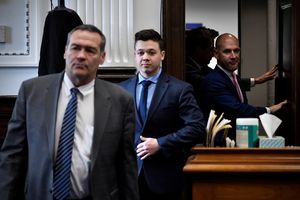 <p><p>Kyle Rittenhouse has been acquitted of all charges after pleading self-defense in the deadly Kenosha, Wisconsin, shootings that became a flashpoint in the nation’s debate over guns, vigilantism and racial injustice.</p></p><p><p>The jury came back with its verdict after close to 3 1/2 days of deliberation.</p></p><p><p>Rittenhouse, 18, could have gotten life in prison if found guilty of the most serious charge against him.</p></p><p><p>He was charged with homicide, attempted homicide and recklessly endangering safety for killing two men and wounding a third with an AR-style semi-automatic rifle.</p></p><p><p>The shootings took place during a night of protests over police violence against Black people in the tumultuous summer of 2020. Rittenhouse is white, as were those he shot. The jury appeared to be overwhelmingly white.</p></p><p><p>Even as the jury weighed the evidence, two mistrial requests from the defense hung over the case, with the potential to upend the verdict if the panel were to convict Rittenhouse. One of those requests asks the judge to go even further and bar prosecutors from retrying him.</p></p><p><p>In their mistrial bid, Rittenhouse’s lawyers complained that they were given an inferior copy of a potentially crucial video and that a prosecutor asked Rittenhouse improper questions during cross-examination about material not admitted into evidence and about his exercising of his constitutional right to remain silent.</p></p><p><p>In a reply filed with the court, prosecutor James Kraus said that the state did not intentionally provide the defense with a lesser-quality video and that Rittenhouse’s lawyers also were supplied with a copy of the original, higher-quality footage played in court.</p></p><p><p>Kraus said in his reply that the file was compressed by the Kenosha Police Department’s email program. He had earlier argued in court that the compression was the fault of the defense attorneys’ email program.</p></p><p><p>Prosecutors contend the video shows Rittenhouse pointing his gun at protesters just before the shooting erupted.</p></p><p><p>The defense has also accused prosecutors of deliberately trying to provoke a mistrial because their case was going poorly and they wanted a do-over trial. But Kraus denied that, saying the state “has never had any intention to create a mistrial” so that it could retry Rittenhouse.</p></p><p><p>If Circuit Judge Bruce Schroeder grants the mistrial request based on the video, Rittenhouse could be retried. If he grants the other mistrial bid, based on the prosecutor’s questions, he could not be put on trial again.</p></p><p><p>The jury resumed deliberations the morning after the judge raised eyebrows among lawyers when he agreed to let a juror take home a copy of the detailed legal instructions he gave to the panel. The instructions consisted of some 36 pages of explanation of the charges and the laws of self-defense.</p></p><p><p>“I don’t know about you guys, but I watch a little TV, in the morning, in the evening. And some of the greatest legal minds in the country, I’m delighted to say, agree with us that the instructions are very confusing,” Schroeder said in granting the juror’s request Thursday.</p></p><p><p>After the jury departed, Rittenhouse attorney Mark Richards told the judge he feared such a move would lead to jurors looking things up in the dictionary or doing their own research at home.</p></p><p><p>Tom Grieve, a Milwaukee lawyer and former prosecutor not involved in the case, called the move “definitely unusual in my experience.”</p></p><p><p>“The natural issue is that it will precipitate armchair research and table discussion,” he said.</p></p><p><p>Rittenhouse was a 17-year-old former police youth cadet when he went to Kenosha in what he said was an effort to protect property after rioters set fires and ransacked businesses on previous nights.</p></p><p><p>He shot and killed Joseph Rosenbaum, 36, and Anthony Huber, 26, and wounded Gaige Grosskreutz, now 28. Rittenhouse is white, as were those he shot.</p></p><p><p>The case has exposed deep divides among Americans over guns, racial injustice, vigilantism and self-defense in the U.S.__</p></p><p><p><em>Forliti reported from Minneapolis, Bauer from Madison, Wisconsin. Associated Press writers Tammy Webber in Fenton, Michigan, and Todd Richmond in Madison contributed to this story.</em></p></p>