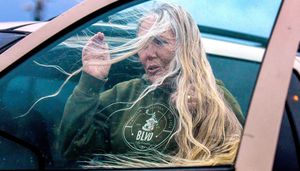 <p><p>A windstorm heading into Spokane Monday afternoon already is causing widespread power outages.</p></p><p><p>A warm and windy afternoon is forecast for the Spokane area Monday with gusts that could reach 50 to 60 mph. </p></p><p><p>National Weather Service Meteorologist Todd Carter said winds were blowing through the Moses Lake area at about 55 mph as of 3:30 p.m. He said he expects those winds to maintain their speed and reach the Spokane area by about 5 p.m. </p></p><p><p>North-south roads could experience dangerous crosswinds, and substantial power outages are likely, she said.</p></p><p><p>State Route 20 near Sherman Pass, between Kettle Falls and Republic, was reopened after downed trees blocked the road earlier Monday afternoon, the according to the Washington state Department of Transportation’s Twitter. </p></p><p><p>The western edge of the West Plains and a large portion of Adams County are expected to see winds up to 70 mph. </p></p><p><p>By 5 p.m., Avista was reporting more than 24,000 customers without power, including large outages near Hunters, Washington and Priest River, Idaho. Inland Power and Light reported at 4:38 p.m. more than 7,000 without power.</p></p><p><p>At 5 p.m. Kootenai Electric Cooperative reported more than 800 without power, and Northern Lights, Inc. reported 10,700.</p></p><p><p>Andy Barth, Inland Light and Power’s government affairs and community relations officer, said the company’s light crews are ready to repair power lines and remove downed trees as quickly as possible, if necessary. </p></p><p><p>“This is what they get paid to do,” Barth said. “They’re good at their jobs.” </p></p><p><p>Rebekah Cheatham, meteorologist at the National Weather Service in Spokane, reminded residents to put away yard decorations, trash cans, and outdoor furniture if possible along with tying down outdoor items. </p></p><p><!–[photoset id=11568]–></p><p><p>The windstorm isn’t expected to be as severe as the <a href=”https://www.spokesman.com/stories/2016/nov/17/2015-windstorm-whipped-up-by-a-convergence-of-even/” target=”_blank”>2015 storm that caused millions of dollars of damage in Spokane and left thousands without power for more than a week.</a> That storm had peak gusts upwards of 70 mph, said Cheatham. </p></p><p><p>“This is going to be a faster moving front,” Cheatham said. </p></p><p><p>Gusts are also forecast to max out in the mid-60 mph range, lower than in 2015. The storm is expected to move through the region <a href=”https://www.spokesman.com/stories/2021/jan/13/wind-knocks-out-power-to-50000-customers-in-spokan/” target=”_blank”>even faster than the January windstorm that left one woman dead. </a></p></p><p><p>Winds will likely die down late Monday night and gusts will drop significantly, Cheatham said. </p></p><p><p>“Tuesday morning we may still have some gusts in the 20s,” Cheatham said. “Then throughout the day we’ll get down to some light and variable type of winds.”</p></p><p><p>There is still the potential for downed trees with soft soil in the region due to the recent rainfall, she said. </p></p><p><p>Avista Utilities, which provides electricity to nearly 400,000 customers in the Spokane area, said in a statement it is prepared for the possibility of outages with teams prepared and standing by if powerlines go down. </p></p><p><p>Estimated power restoration times likely won’t be available until the storm has passed, both Avista and Inland Light and Power said.</p></p><p><p>Avista outages can be reported online at myavista.com/outage or by calling (800) 227-9187. Barth encouraged Inland Light and Power customers to call the company at (877) 668-8243 if they lose power or if they see a downed power line. The company has an automated outage detection system, but Barth said eyewitness accounts are valuable. </p></p><p><p>Avista recommends turning off appliances that were on before the power went out, unplugging electronics, like computers, and turning on front porch lights to alert Avista crews to which homes have power. </p></p><p><p>Monday is also forecast to be unseasonably warm with a high of 61 degrees. The record high at for Nov. 15 is 60 degrees in 1896, Cheatham said. </p></p><p><p>“There’s definitely potential for a tied or broken record,” she said.</p></p><p><p>Temperatures are expected to return to normal mid-week with high temperatures in the upper 30s and low 40s, Cheatham said. </p></p>