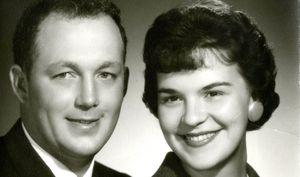 <p><p>The card showed up long before Thanksgiving was on the mind of most people.</p></p><p><p>In a cursive hand, inside a neat little card, the correspondent proposed writing a piece in the paper on the subject of gratitude – detailing the many ways in which, however bad the days may seem, we would do well to remember what’s good in our lives.</p></p><p><p>“A lot of things are better!” is how Carol Stueckle put it in that hand-written note.</p></p><p><p>It was the first of several such notes. One included a large sheet that resembles a political yard sign, with a check mark inside a box and the words: “Choose Gratitude.”</p></p><p><p>Stueckle is an 83-year-old who lives in an assisted living community in Pullman, and for today she will be serving as our Thanksgiving ambassador, reminding us how to be grateful for the good fortune we enjoy.</p></p><p><p>Between a couple of subsequent phone calls and notes, Stueckle detailed some of the basic, simple things in her life – and ours – that are better now than they used to be, many of which are so basic that we might not ever think about them.</p></p><p><p>“Plumbing. Furniture. Transportation. Clothing.”</p></p><p><p>It’s a simple list but a good one, when you put your mind to it, though most of us might not stop to ponder why, say, plumbing might be at the top of the list. I am fortunate to have a long-standing relationship with a plumber who is a storyteller and smart guy, who has made the relevant point on more than one occasion that if it weren’t for this elaborate system of pipes and plants and faucets and flushes, society would all but collapse.</p></p><p><p>Stueckle learned her appreciation for it by growing up without it on a farm outside Endicott, Washington, – “near Colfax.”</p></p><p><p>“We had an outhouse,” she said. “We had to pump our water, and when we went to the bathroom, we had to go outside.”</p></p><p><p>So, plumbing, of course. Top of the list. No argument.</p></p><p><p>And when you get on your pocket miracle to Facetime your grandchildren, Carol wants you to recall the ways we all communicated back when we had landlines – and when people in small, rural areas shared party lines.</p></p><p><p>She has lived a long, interesting life, not without its trials and what she thinks of as her mistakes. But, at this point at least, her attitude toward those trials seems bemused and accepting – she tells a lively, funny story, and isn’t reluctant to make herself the object of the joke.</p></p><p><p>“We make mistakes,” she said. “We have to forgive others, and we have to forgive ourselves.”</p></p><p><p>Stueckle tells of the time after her husband died, when she was doing various jobs and keeping an eye on the homes of friends and neighbors while they were away from town. She said the first time she did that, it was winter and when she approached the house on the icy roads, she slid in her car off the road and into the porch.</p></p><p><p>“I called (the homeowner) and I said, ‘I want to tell you something,’ ” she said. “He said, ‘How are my plants doing?’ I said, ‘Your plants are healthy. They’re fine. But I destroyed your house.’</p></p><p><p>“He laughed. Fortunately, we both had insurance.”</p></p><p><p>Her ability to use misfortune as a selling point for insurance came in handy on more than one occasion. More on that later.</p></p><p><p>Carol grew up on the farm, and went to Washington State when it was a college, not a university.</p></p><p><p>“I decided I wanted to be an actress,” she said. “But I quit going to school and married a farmer. That ended that.”</p></p><p><p>She and her husband, Ben, met when they were both performing at a wedding.</p></p><p><p>“He sang and I played (organ) for the wedding,” she said. “The poor guy didn’t stand a chance.”</p></p><p><p>As with many of Carol’s comments, she punctuated that one with a chuckle.</p></p><p><p>They lived on a farm outside of Colfax and raised two daughters. Thirty-six years ago, Ben died suddenly of a heart attack. They’d been married for more than 25 years.</p></p><p><p>“It threw me into widowhood, which I certainly didn’t like,” she said.</p></p><p><p>She was unprepared for running the farm, she said. She made mistakes and eventually was forced to auction off the farm and household. As she recovered from that blow, she had to figure out what to do next. She decided to write a story about her family’s life.</p></p><p><p>“I wrote a story about our love and our life and some mistakes,” she said. “I called it ‘Love, Honor and Check Your Assets.’ ”</p></p><p><p>Chuckle.</p></p><p><p>Carol went to work for an insurance company and as a motivational speaker, telling this story at conferences and events all around the region. She eventually served as the mayor of Colfax and worked for many years as the head of the foundation for the hospital. Her tendency to turn adversity into motivation showed up again when she lost that job in 2010 – and started a new enterprise called “A New View at 72.”</p></p><p><p>Back then, Spokesman-Review columnist Rebecca Nappi interviewed her for a series called Wise Words, in which Stueckle said:</p></p><p><p>“No matter what your circumstances are, it doesn’t matter. You can be happy. You can have fun. You do have to create it. No one will knock at your door. That’s why I can say things are so much better now. Every 10 years, it just got better and better and better.”</p></p><p><p>Carol moved into Bishop Place Senior Living in Pullman a few years back, after falling and breaking a hip. She plans to spend the holiday with her daughters, Susan and Sherri – for whom she is very thankful – and to contribute cranberry sauce.</p></p><p><p>“From a can,” she said.</p></p><p><p>Chuckle.</p></p><p><p>I asked her why gratitude was so important to her. Why she had so vigorously taken on the project of getting me to write about it.</p></p><p><p>“ ’Cause I’m grateful!” she said, as if it were the silliest of questions. “I’m thankful! I now see that Thanksgiving – I see where it came from.”</p></p>

← 'The consumer has more voice': How advertising has become more 'complicated' since the ’70s
Metallica Version Of Mystery Game ‘Clue’ Unveiled →