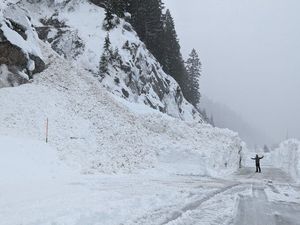 <p><p>From staff and wire reports</p></p><p><p>Snoqualmie and Blewett passes in Central Washington will reopen at 5 p.m. Sunday, according to the Washington Department of Transportation.</p></p><p><p>The Interstate 90 pass through the Cascades has been closed since Thursday morning following record-breaking snowfall, snarling the movement of freight from the coast to the Inland Northwest and stranding travelers. WSDOT said the priority will be freight travel, and speeds will be restricted to 45 mph on two narrow lanes through the mountains.</p></p><p><p>“We can’t emphasize enough that a crash upon reopening Snoqualmie Pass could cause the highway to close again,” Mike Allende, social media manager for WSDOT, wrote in a blog post announcing the reopening. “It really only takes one driver going too fast or being unprepared to shut it back down.”</p></p><p><p>Travelers are advised to use traction tires, and those traveling for recreation are encouraged to wait until later in the week as crews continue to clear snow from the roadways.</p></p><p><p>Offramps are blocked, which means those traveling through the pass should be prepared to do so without stopping.</p></p><p><p>Blewett Pass on U.S. 97 is also scheduled to reopen at 5 p.m. Sunday. White Pass is expected to open sometime Monday, while Stevens Pass is likely to remain closed through Wednesday due to ice that is 4 inches thick on the roadway, according to WSDOT.</p></p><p><p>In Western Washington, flooding coursed over roads, inundated farmland and curtailed access to a Native American reservation in Washington state on Sunday as the Pacific Northwest slowly recovered from a series of storms that have engulfed the region with rain and snow.</p></p><p><p>The swollen Chehalis River was expected to crest Sunday as the region enjoyed a dry weekend after a series of winter storms since Dec. 17. Crews, meanwhile, worked to open several major highways connecting Seattle to the east that have been closed for days by heavy snow, avalanches and debris.</p></p><p><p>Southwest Washington <a href=”https://apnews.com/article/floods-storms-seattle-washington-weather-e06624401bef0091ef4282c32525ce73″>has experienced its worst flooding in a decade</a> and some rivers crested at more than 18 feet last week, the National Weather Service said. Washington Gov. Jay Inslee issued an emergency proclamation on Friday.</p></p><p><p>The weather service issued flood warnings Sunday for Grays Harbor and Thurston counties. It said moderate flooding in the Chehalis River was affecting road access to the Chehalis Reservation near Oakville. A flood warning continued for the Pudding River in Oregon’s Clackamas and Marion counties.</p></p><p><p>In Washington’s Grays County, authorities were searching for a man reported missing after driving into floodwaters in Elma early Sunday, but it wasn’t known if the man was swept away or walked out on his own, said Undersheriff Brad Johansson.</p></p><p><p>The search came after emergency workers said Saturday they had recovered the body of a 72-year-old man whose vehicle was swept away by flooding near Cosmopolis.</p></p><p><p>Crews worked to open several major highways connecting Seattle to the east, including Interstate 90 over Snoqualmie Pass and U.S. Highway 97 over Blewitt Pass, the Washington Department of Transportation said.</p></p><p><p>U.S. 12 over White Pass may reopen Monday, the department said. But avalanche danger and multiple snowslides reaching 35 feet made it unlikely that a 44-mile stretch of U.S. 2 over Stevens Pass would reopen before Tuesday.</p></p><p><p>At the eastern end of that stretch of U.S. 2, the National Guard was deployed to the hard-hit city village of Leavenworth in the Cascade Mountains for snow cleanup, food delivery and other services. Mayor Carl Florea asked for Guard help after the resort received 4 feet of snow in 48 hours last week.</p></p><p><p>Kelly Kortman spent the last three days clearing snow off decks and roofs of four cabins in the area he rents to vacationers, trying to make sure they don’t collapse.</p></p><p><p>“It is a surreal state of affairs, it’s beyond the pale,” <a href=”https://www.seattletimes.com/seattle-news/transportation/washington-mountain-passes-remain-closed-i-5-is-open”>Kortman told the Seattle Times</a>.</p></p><p><p>Allende thanked travelers for their patience as they reopen the passes.</p></p><p><p>The last time all four passes (Stevens, White, Snoqualmie and Blewett) were closed for an extended period of time was in January 2009, the agency said.</p></p><p><p>“Again, we recognize that everyone wants to get moving and to their destination. Our crews are working as hard and fast as they safely can in very challenging conditions, and we appreciate your continued patience,” Allende wrote.</p></p><p><p><em>Staff writer Kip Hill and the Associated Press contributed to this report.</em></p></p>

← Spoon Share Cover Of David Bowie’s ‘I Can’t Give Everything Away’
Crews search for woman, boy after vehicle plunges into river →