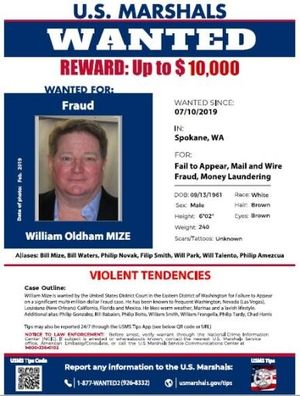 <p><p>U.S. Marshals are offering a reward of up to $10,000 for information leading to the capture of a man who allegedly participated in a multimillion-dollar fraud.</p></p><p><p>William Oldham Mize, 60, failed to appear for a pretrial conference before U.S. District Judge Thomas O. Rice in Spokane, according to a news release from the U.S. Attorney’s Office for the Eastern District of Washington.</p></p><p><p>Mize has been a fugitive from justice since July 2019 when he violated his pretrial release conditions by failing to make himself available for pretrial supervision to the U.S. Probation Office and failing to contact his attorney, the release said.</p></p><p><p>A federal grand jury found probable cause in 2018 to indict Mize and others on charges including mail fraud, wire fraud, conspiracy to commit mail fraud and wire fraud, conspiracy to commit health care fraud, money laundering and conspiracy to commit money laundering, the release said. The alleged criminal activity took place from 2013 to 2018.</p></p><p><p>Court records indicate that Mize is alleged to have caused fake car accidents, falls and other accidents in multiple states. To date, insurers have paid more than $6 million on Mize’s allegedly fraudulent claims.</p></p><p><p>The plot included several accomplices, according to an indictment handed down in December 2018. One of those accomplices included Spokane developer Ron Wells, who pleaded guilty to charges and was sentenced to three years’ probation as well as more than $240,000 in fines and restitution in February 2020.</p></p><p><p>Court records indicated Wells had paid his restitution as of September 2020.</p></p><p><p>Mize is a white man with brown hair and brown eyes. He is 6-foot, 2 inches and weighs about 240 pounds. A photo of Mize wasn’t immediately available.</p></p><p><p>Tips may be submitted to the U.S. Marshals Service by calling 1(877) WANTED2 or using the USMS Tips App.</p></p>